Leon McAuliffe: The So-Called Retirement of a Steel Guitar King 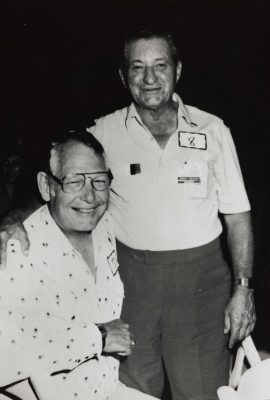 In the late 1960s, Leon McAuliffe moved to Rogers, Arkansas, to take it easy and, perhaps, reflect on his successful music career. No stranger to Northwest Arkansas, the former steel guitarist with The Texas Playboys (“Take it away, Leon!”) could check on Rogers radio station KAMO, which he owned, maybe go fishing at Beaver Lake or play a round of golf. Yet during this “retirement,” he made record albums with Merle Haggard, Tompall Glaser and Leon Redbone, was leader of the resurrected Texas Playboys, performed on the first episode of the very first season of a now popular TV series, picked up a couple of major music awards, provided music for, and briefly appeared in, an Academy Award-winning movie and, of all things, became a music professor.

Sandra Cox Birchfield grew up in Fayetteville and is a longtime resident of Northwest Arkansas. Her house was always filled with music. Her father, Sidney Cox, made mountain dulcimers, which were sought out by musicians both locally and nationally. A former features editor with both the Arkansas Democrat-Gazette and The Northwest Arkansas Times, Birchfield has a passion for discovering, celebrating and sharing the musical history of the Arkansas Ozarks, some of which can be found on her blog, Echoes of the Ozarks.

This virtual program is Wednesday, August 18, at noon. The event is free but registration is required. The event is limited to 100 people. Register on the form below. You will receive a confirmation with the login information and another email reminder just prior to the event.