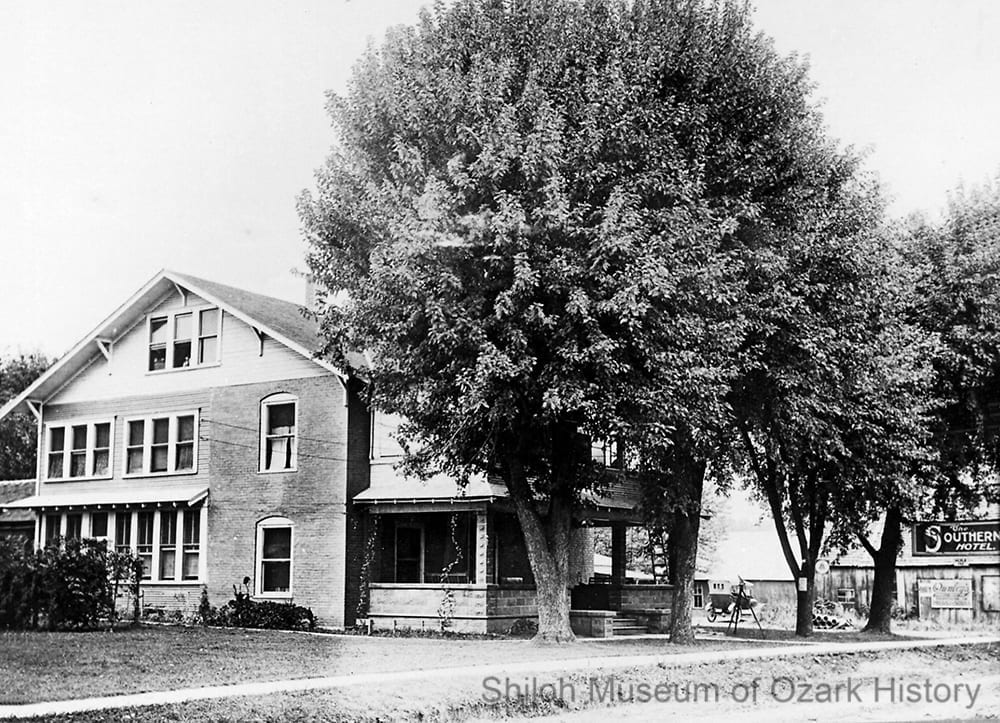 Southern Hotel on the southeast corner of Holcomb and Meadow in downtown Springdale, early 1900s.

Note: Vance Randolph (1892–1980) was a folklorist whose writings on the traditional Ozark culture were published from the 1920s through the 1970s in collections such as Ozark Folksongs, Ozark Superstitions, and Down in the Holler: A Gallery of Ozark Folk Speech, among others.

In 1968 the Shiloh Museum was given a guest register from Springdale’s Southern Hotel. Joe Robinson, a Springdale businessman and a founding board member of the Shiloh Museum, recovered the ledger after the old hotel building was torn down as part of Springdale’s urban renewal program. (Urban renewal was a federal program that ran from 1950s to the 1970s that sought to renovate towns and cities nationwide by removing rundown buildings and homes to make way for new development.)

Flora and Henry B. Rice opened the Southern Hotel in 1920 in a converted house on the southeast corner of Holcomb Street and Meadow Avenue. Their customers came from as far away as New York and as close as Springdale (the locals were mostly extended-stay boarders.) The hotel’s claim to fame was Flora Rice’s delectable home-style meals. In 1935 the Rices moved to another, smaller, converted house on the corner Main Street and Grove Avenue where they ran the Southern until the early 1960s. The building on Holcomb became the Alvin Hotel, which operated until 1966. It also was torn down during urban renewal. 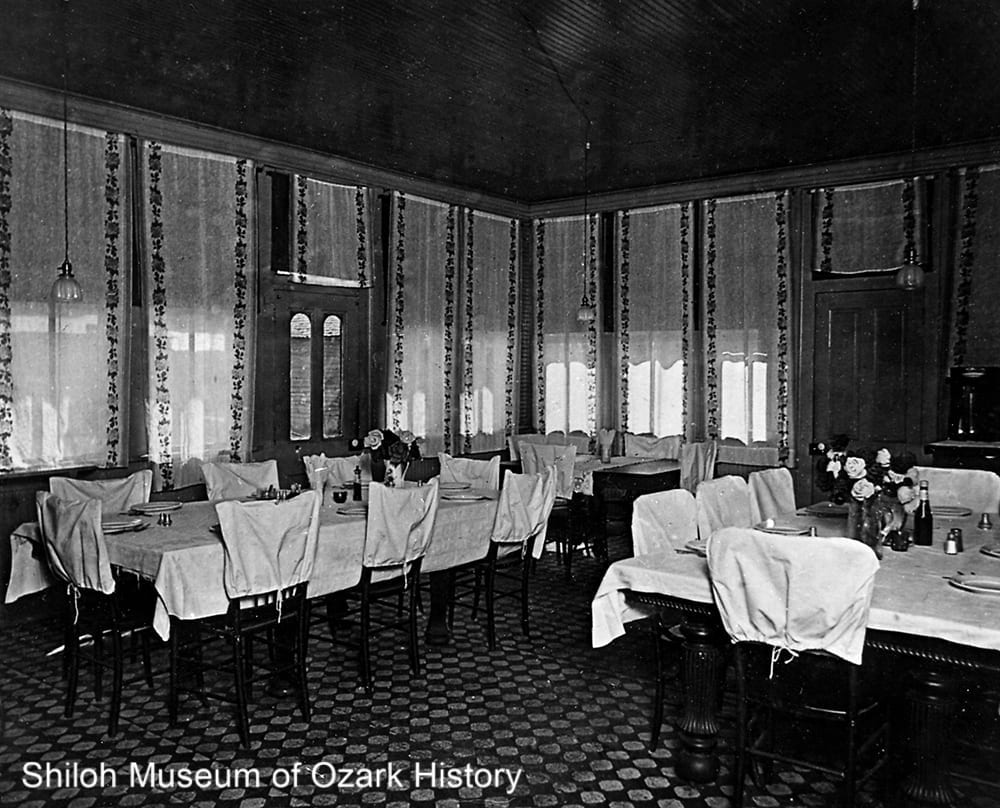 The Southern Hotel register is a big item, about the size of a cement block and just as heavy (it seems). In my thirty-five years as collections manager I have had to build it a custom storage box and move it a few times for re-shelving purposes. From time to time I would turn its pages and think how interesting it might be make a list of all the names to see who stopped at the hotel back in the day. Other projects kept it on the back burner until this year when Michele Gibson, our front desk receptionist, volunteered to take on the task. So in between her front desk and gift shop duties she has been transcribing eleven years (from 1920 to 1931) of Southern Hotel guest signatures. That’s 4015 days, multiple listings per day, and often with challenging handwriting. We’re at over 14,000 names and counting.

On the very first day of the project, on the very first page of the ledger—May 4, 1920—we had our first surprise. There on the page was “Vance Randolph, Kansas City.” What!? Was this the noted Ozark folklorist Vance Randolph? To confirm that it might be him, Michele looked for his autograph online to compare the signature. It was not his signature. But then we noticed that the hand that wrote “Vance Randolph” had written the name above it on the register, “N. R. Tripp,” also from Kansas City. And they were both booked for Room 9. We theorized that Tripp and Randolph were traveling together.

But how to confirm this? The first place to look was in Robert Cochran’s definitive biography, Vance Randolph, An Ozark Life, which lays out Randolph’s life in great detail. Randolph, born in 1892, was raised in Pittsburg, Kansas. By 1920 he had completed most of his education with a B.A. in biology and M.A. in psychology. He applied to do graduate studies on Ozark Mountain people under pioneer anthropologist Franz Boas at Columbia, but those plans fell apart when Randolph couldn’t get Boas interested in the project. 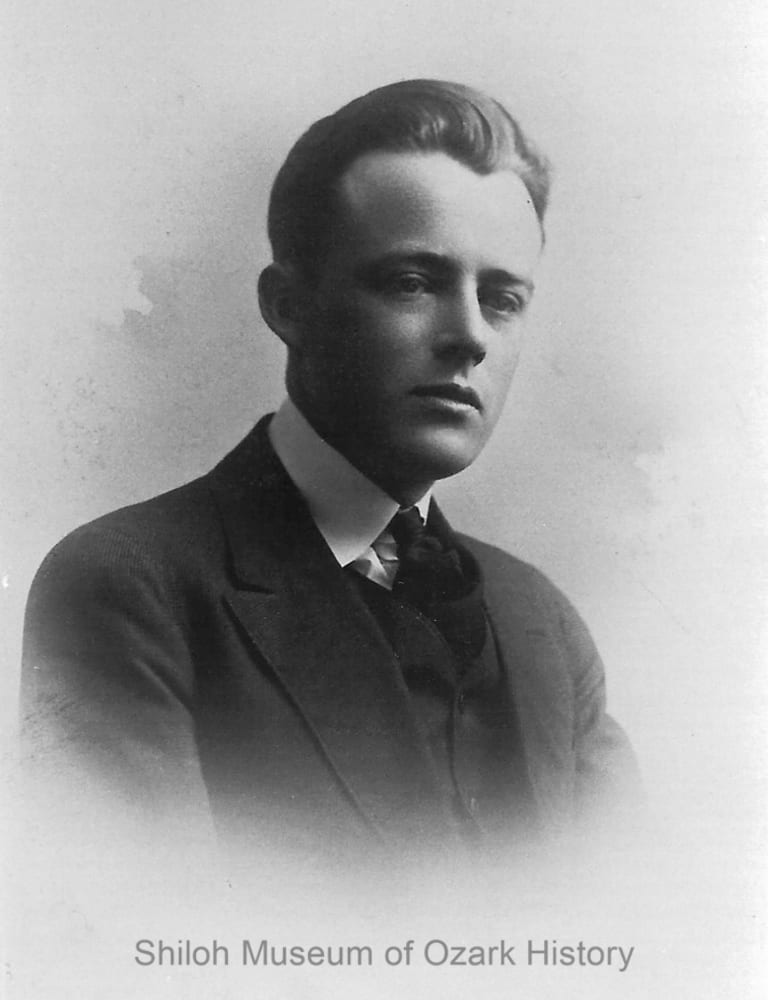 Vance Randolph when he was a high school biology teacher in Pittsburg, Kansas, 1916.

In the years leading up to 1920 Randolph had dabbled in Socialist politics, briefly worked as an insurance salesman and high school teacher, served in the Army during WWI, and traveled the country. He had also started to write, some of his first work appearing signed and unsigned in pre-war editions of Appeal to Reason, a Socialist newspaper published in Pittsburg, Kansas. Cochran writes, “By late spring, 1920 Randolph seems to have returned to Pittsburg from his East Coast wanderings—he was apparently in St. Louis on February 23—and evidently spent much of his time over in the Ozarks. There are song citations from May, June, and July, a three-month break in the late summer and fall, and then more citations for November and December.”

So now I knew roughly about Vance Randolph’s activities in 1920, but what about N. R. Tripp? Turning back to Cochran’s book I checked the index and there I found an entry for one Newell R. Tripp. But wait a minute; it was listed in quotes as one of Vance Randolph’s pseudonyms. A quick check in the book revealed that it was a nom de plume that Randolph used in the mid-1920s. Randolph and Tripp visited Springdale in 1920.

It was time to track down the real Newell R. Tripp.

Thanks to Ancestry.com, finding Newell Richard Tripp didn’t take long. The first thing that popped up was the 1920 census showing him living in Joplin, Missouri, married, and working as a traveling salesman for a wholesale drug company. A few more clicks and I had found his connection to Vance. Tripp was born in Kansas in 1889 and spent some years in the Kansas cities of Beloit and Lawrence. From 1914 to 1917 he lived in Pittsburg, Kansas, like Randolph. And, like Randolph, he was drafted into service in July 1917.

So now I had Tripp and Randolph in the same town at the same time and that might have been enough, with so much time passed, to assume some kind of an acquaintance between the two. But then, while searching through issues of the Pittsburg Daily Headlight at Newspapers.com, I found two articles that revealed their connection. First was an article from 1917 regarding Tripp’s deferment from service (he had a dependent wife and child) that also detailed his life in Pittsburg before he was drafted. Besides his job at a local pharmacy and as a traveling salesman, turns out Tripp, like Randolph, was active in the local Socialist party. In fact, he ran for justice of the peace on the Socialist ticket. Surely they had crossed paths there. One more article finally proved their acquaintance. In the “Local Mention” column of the June 5, 1916, issue of the Headlight the following notice appeared:

So Randolph and Tripp were buddies in Pittsburg before the war and afterwards. In 1920, although they lived in different states, they met up again for a series of trips to Springdale. But for what purpose? Was Tripp, the traveling salesman, out on sales calls with Randolph tagging along? Who knows? They stopped at the Southern Hotel on May 4, August 17 and 18, and September 28. Issues of the Springdale News around those dates had nothing to report. But then, a traveling salesman on his rounds would not necessarily be newsworthy. And as regards Vance Randolph, it would be another 10-20 years before he would gain recognition as folklorist of the Ozarks.

Cochran wrote that Vance Randolph considered 1920 a watershed year in his life, the one that set him on the path for his life’s work. In December 1920 Randolph bought a cabin in Pineville, Missouri. It became his base for many years as he began to collect and write about Ozark songs, dialect, and culture. His first published work on Ozarks culture, “A Word-list from the Ozarks,” appeared in Dialect Notes of the American Dialect Society in 1927.

In his work as a freelance writer on a myriad of non-Ozark topics, Vance Randolph sometimes used pseudonyms. Under the name “Newell R. Tripp,” Randolph authored The ABC of Chemistry for Vanguard Press in 1924 and Behaviorism: The Newest Psychology (circa 1925) for the Little Blue Book paperback series published by E. Haldeman-Julius. (And just to “put a bow on it,” Haldeman-Julius was also a Socialist Party buddy of Randolph.) I wonder if the real Newell R. Tripp ever knew that his name was used as a pen name by his friend, Vance Randolph?

Vance Randolph returned to Springdale at least one more time in his career. In February 1942 he came to town to collect and record folksongs from Maggie Glover Morgan, which would be published in his book Ozark Folksongs in 1946.