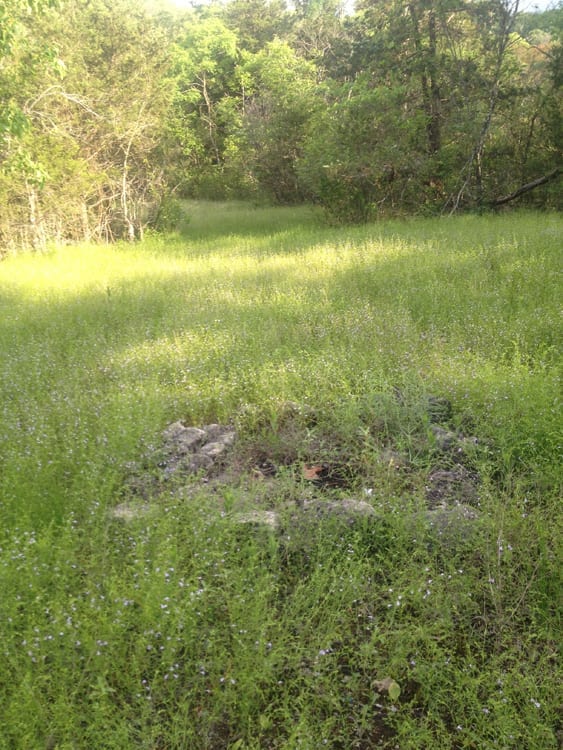 Remains of a fire ring at the Ozark Mountain Folk Fair site, 2013.

Ever since we moved to Arkansas, my husband and I have tried to spend a little time every weekend clearing land on part of the family property where we plan on building a house. In the process of this, we’ve uncovered a variety of debris, from an old beaded moccasin to artisan glass wine bottles, as well as the remnants of countless fire rings. As way of explanation, my husband mentioned a music festival his father told him about that took place here forty years ago. I imagined a small get-together of a few hundred people and then naturally was distracted by other thoughts, such as getting out of the way of the brush hog. 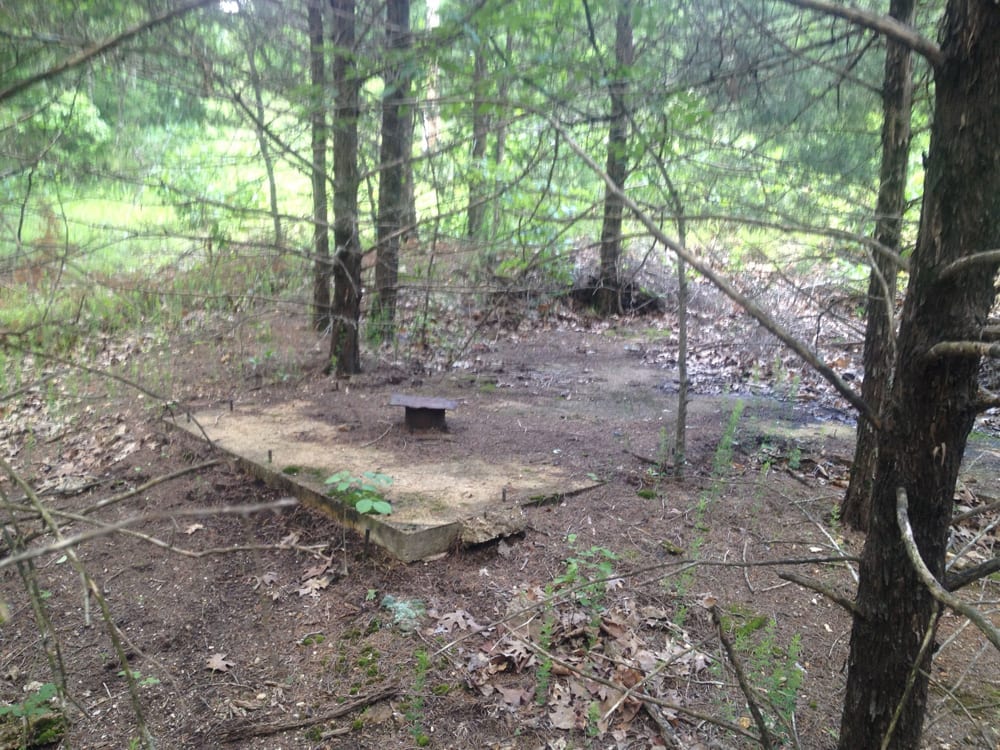 It wasn’t until we were hiking a little further up, and we stumbled into the water spigots and the well that I started to seriously reconsider the context of this music festival. Any event that requires its own source of water, namely, the pricey undertaking of drilling a well, is no small thing. As a researcher, I followed my instinct to dig in and see what other information I could unearth. What I found was an event that not only represented the mix of cultural currents that flowed through Eureka Springs in the early 1970s (and still does today) but also the trail of historical connections woven by the paths of people associated with it. 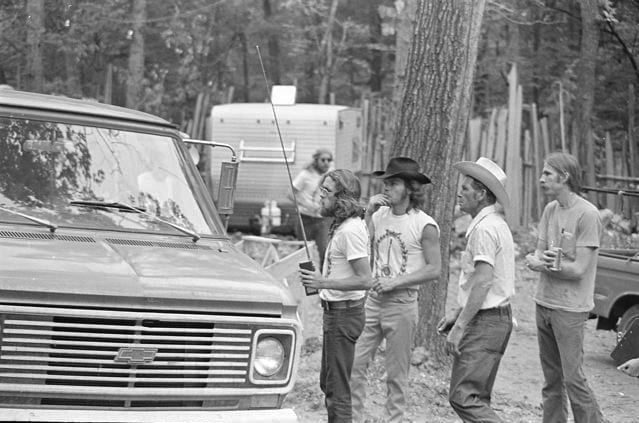 The Ozark Mountain Folk Fair held Memorial Day weekend of 1973 was the first and only outdoor music festival held at the ten-acre Oakhill Eco-Park in Carroll County, north of Eureka Springs and just south of the Missouri state line. I have been told that conflicts over money, namely that “No one, including performers, was paid,” contributed to it being a unique event. Various musicians including John Lee Hooker, Ramblin’ Jack Elliot, Big Mama Thornton, Nitty Gritty Dirt Band, Earl Scruggs, and many others performed at the three-day festival that represented a variety of musical genres, such as bluegrass, folk, blues, and gospel. Organizers had prepared for a crowd of 60,000 people, though the Lawrence (KS) Daily Journal reported that as many as 150,000 people showed up despite the rain and subsequent mud to see the show. The overwhelming crowd was unanticipated and as a result, local service stations temporarily ran out of gasoline. To compare, Wakarusa, the folk-music festival held annually on Mulberry Mountain in Franklin County had about 50,000 people attending in 2005, or to think of it another way, the present population of Fayetteville totals just over 75,000. 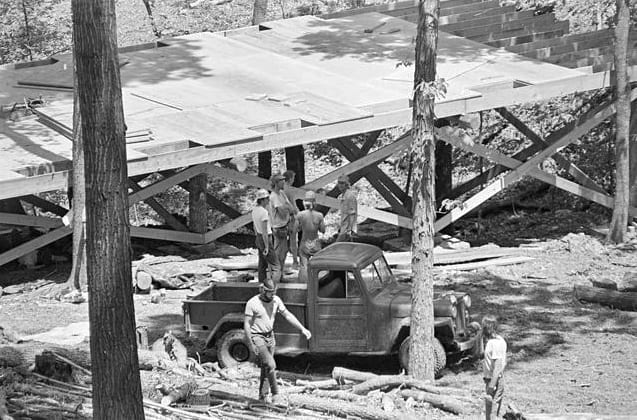 The Eco-Park was designed by Albert Skiles, a local Fayetteville architect who has gone on to design many modern and environmentally friendly homes along with well-known buildings including the expansion of the Dickson St. Liquor retail store in Fayetteville and the Little Portion Chapel near Eureka Springs. Little Portion Chapel is run by the Brothers and Sisters of Charity of the Little Portion hermitage/monastery, founded by John Michael Talbot. Talbot was formerly the guitarist for Oklahoma City-based band Mason Proffit, who was among the many acts in the line-up at the Ozark Mountain Folk Fair.

According to Joseph Kotarba in Baby Boomer Rock’n’ Roll Fans, following his performance at the Oakhill Eco-Park, Talbot came to the conclusion that the rock and roll lifestyle was ultimately not for him and he began the spiritual quest that eventually led him to open Little Portion. Eureka Springs is also well-known for its culture of devout believers—the famous Christ of the Ozarks statue was erected just seven years previous, and the premiere performance of the Great Passion Play was staged only five years earlier in 1968. Despite the contradictions in these seemingly very different cultures, the harmony was effectively achieved as a local street ministry group led by Dale and Laura Nichols attended the festival to hand out copies of the New Testament to concert-goers. 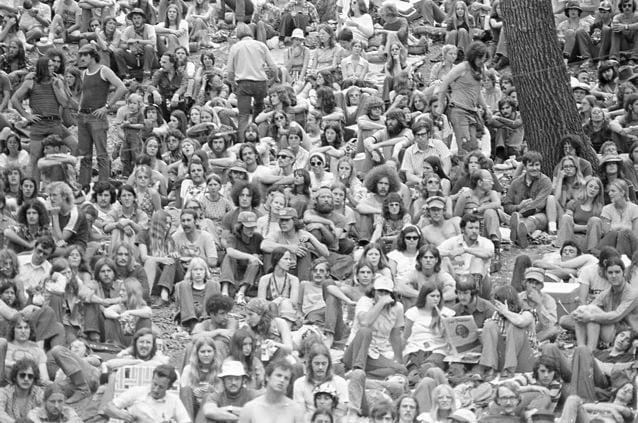 When viewing pictures of the masses of people who covered these tranquil hills, it is stunning to consider the vast numbers of lives and musical talent that coincided beneath the tall shade trees that weekend in May. Nowadays, when we uncover a bottle or an old piece of jewelry in the dirt while we’re clearing land for our new house, I think of all those people, as one Lawrence, Kansas, resident put it, having “One heckuva party.”

April Griffith was the Shiloh Museum’s library assistant from 2012–2015.