Growing up in the south, I came to appreciate the art of embellishing a story. You never outright lie; you simply over-emphasize certain aspects of the truth and leave out the boring and irrelevant bits. As both a librarian and a historian, I have also learned that often the truth is stranger than fiction—no embellishment needed. So when I come across a peculiar image or just something different in our photo collection, I often wonder just what the story behind the image is. Some of them you know had to be a good one. Who were these people? And why were they doing that? Or what is really going on here?

Below you will find some images from our collection that are just fun. A couple of them have me scratching my head a little. 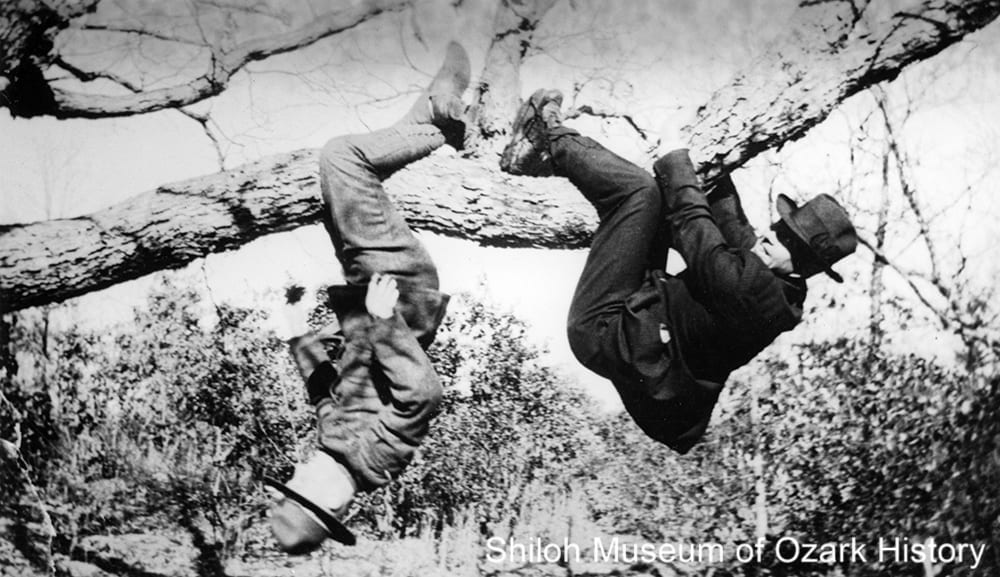 The question here is, what would possess two grown men to climb a tree? You know that when they told this story (if they ever did!) it was likely one of those “you had to be there” moments.

Here’s what I can tell you about Asa Coger, the man on the right. He was born October 8, 1880, to Franklin Monroe and Lucinda Jane Davis Coger.  He died January 16, 1978, and is buried next to his wife, Amanda Ethel Bedingfield Coger, in Hindsville Cemetery (Madison County). He appears on the 1900 census as “H. B. Coger” and his home is in War Eagle, Benton County. He and Ethel married on January 17, 1907, in Madison County. In 1910, they lived in Hilburn township (Madison County) and he was a druggist. Asa Coger’s World War I draft card reveals that he was average height and build, with blue eyes and light-colored hair. In 1920, the Cogers returned to War Eagle. Drug Trade Weekly: A Commercial Publication for Druggists noted that in 1921, “Asa B. Coger, Huntsville, Ark., who has been engaged in the drug business for several years will erect a large drug store at Springdale.” His World War II draft card indicates a 61-year-old man who is self-employed as the owner of Coger Drug Store on Emma Avenue in Springdale.

While I was able to determine who he was and what he accomplished with his life, I still do not know why a man who was already engaged as a pharmacist was hanging upside-down from a tree limb. 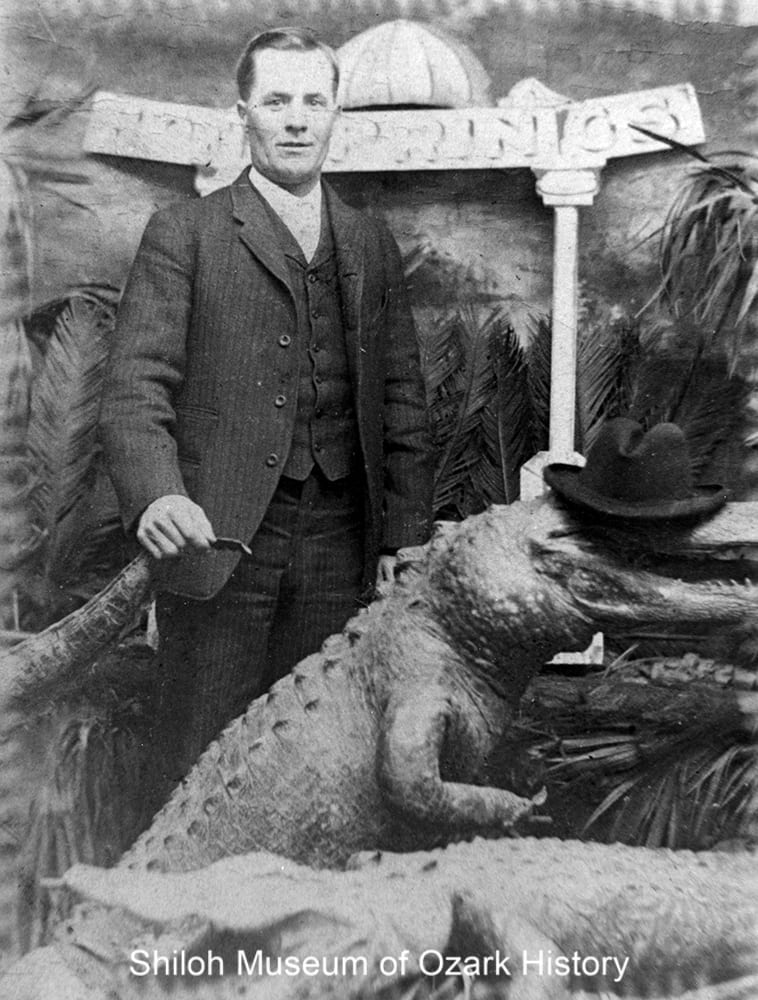 The alligator wearing your hat says it all, right? Here’s the thing, the photo was taken in Hot Springs, Arkansas. Who was this guy? Why was he in Hot Springs? Our database lists him as Alfred Thomas Smith. Based on another Smith family photo I found on a genealogy website, I believe our Alfred Thomas Smith was born August 20, 1861, and died August 31,1924.  He was married to Florence Eli Fitch (1866-1947). In both the 1880 and 1900 censuses, he lived in Madison County. After his marriage to Florence, they lived in Springdale, Arkansas, and, in the 1910 census, he is listed as a farmer. According to the 1920 census, they lived on Holcomb Street in Springdale and his occupation was still farming. 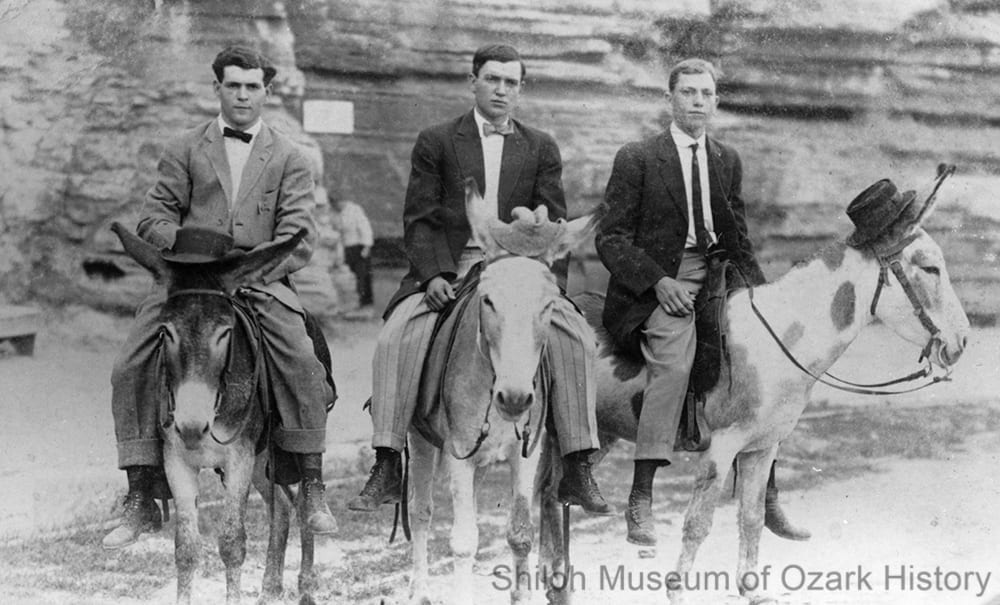 This one is described in our database as “men on silly donkeys.” The donor of the photo, Ardella Braswell Vaughan, was born in Green Forest, Arkansas, and lived most of her life in Jasper (Newton County), Arkansas.

The only person identified in the photo is John Blackford (middle), who was a friend of Ardella’s. As far as I can tell, Blackford was born September 10, 1881, and died August 20, 1967. He married Lela E. Bishop. They lived in Johnson and Pope counties in the Arkansas River Valley. 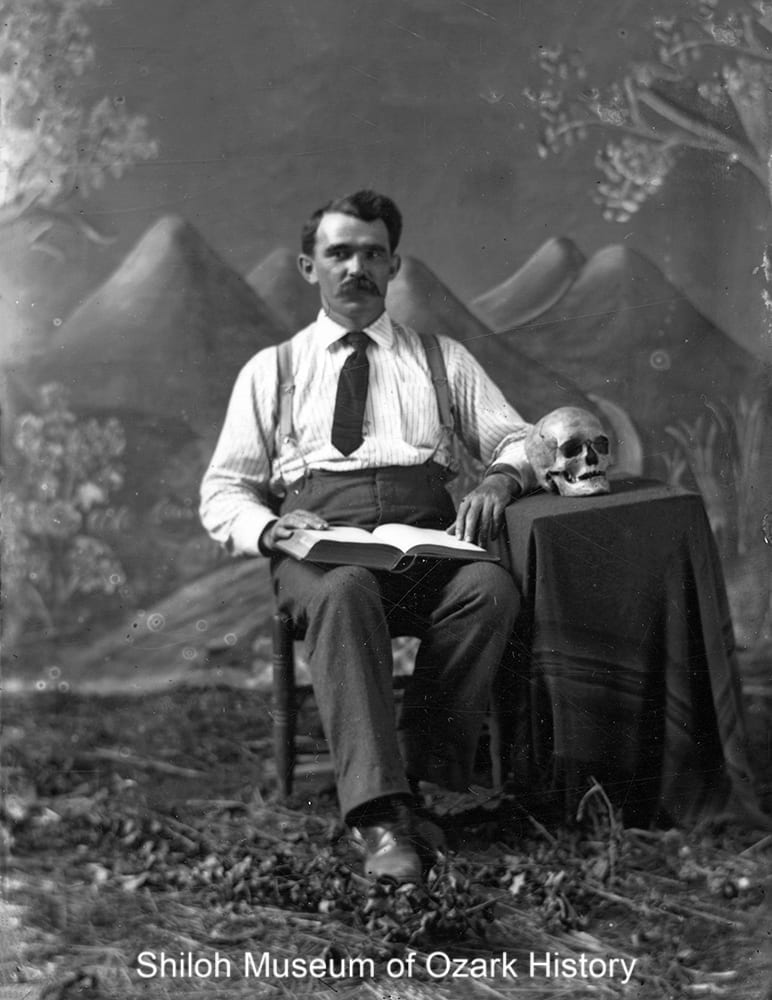 I must admit, I was a little disappointed to discover this gentleman was a doctor. But then I wondered if he brought his own props for the photo shoot. Surely the photographer did not have a human skull just lying around, right? And did the doctor have this photo displayed in his office?

Dr. Alonzo Everding Quinn was born May 21, 1841, and died March 21, 1910. According to his obituary in the Springdale News, he was a physician in Grandview (Carroll County) for nearly twenty years. In 1860, he was living in Ohio and and was employed as a school teacher. In 1870, Quinn, his wife, and his children lived in Kansas and by 1880, he is listed as a physician in Carroll County, Arkansas.  Dr. Quinn died of blood poisoning and left behind a wife and seven children.

This photo of Dr. Quinn is part of a large collection of glass plate negatives donated to the Shiloh Museum by Dr. Quinn’s granddaughter. The negatives were found in the attic of the Quinn home. 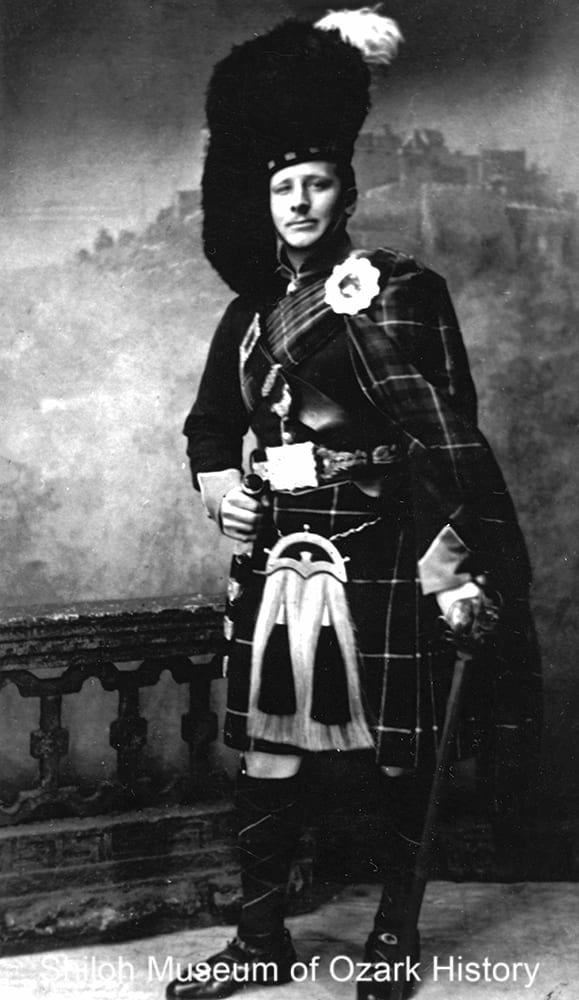 Who doesn’t love a kilt? According to information provided by Charles Blanchard (the subject and donor of this photo), he may have indulged a little too much with some friends and they all decided to go to a photo studio and have their photos taken while dressed like Scotsmen. He also noted that they had to stand very still for the camera.

I’m still kinda curious to know why the man was in Scotland in 1934. Was he serving in a military capacity or just on holiday with some friends?