My curiosity has been piqued lately. Want to chase a few wild geese with me? 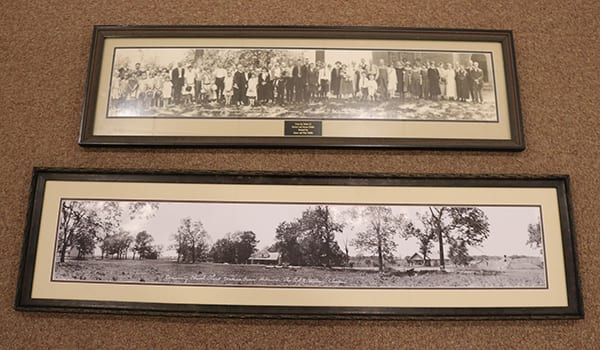 Wild Goose #1. Rev. John E. King brought in two wonderful panoramic photos of a church and congregation on behalf of the Administrative Commission for Walnut Grove Presbyterian Church (near the Washington County town of Farmington). Sadly, the church recently disbanded. The images were taken in 1925 by J.C. Hawkins of Newton, Iowa. Hawkins’ name seemed familiar so I checked our photo database. Sure enough, we now have ten of his panoramic images in the collection, all taken in Washington and Madison counties within the span of a few weeks:

Who was John C. Hawkins? Through an Internet search I learned that in 1909 he founded the Clipless Paper Fastener Company in Newton. While he’s listed as a manufacturer of paper fasteners in the 1920 census, by 1930 he’s a hotel manager. The executive director of the Jasper County Historical Museum in Newton kindly sent a scan from A Century of Industrial Progress in Newton, Iowa, which notes that Hawkins’ company went into receivership and was purchased in 1925. So perhaps he picked up a camera as a way to earn a bit of money. Neither the director nor a county historian knew of Hawkins’ photographic activities, but now they’re intrigued as well. Perhaps they’ll chase that wild goose for me. 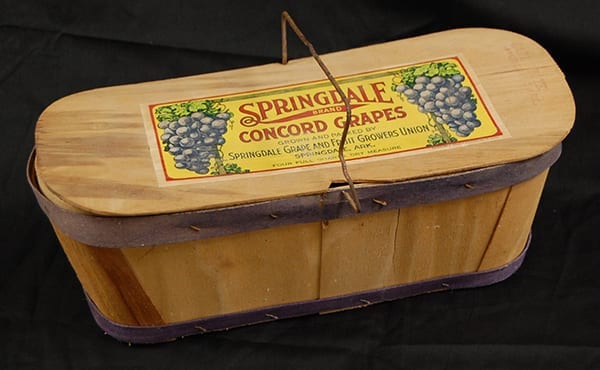 Wild Goose #2. A researcher working on a project about the grape industry in Springdale needed two things from me—a scan of a label found on a grape basket in the collection and information about the Ozark Grape Festivals of the 1920s. As part of my research I read that during the first festival in 1925 the Springdale Community Club sent out nearly 4,000 complimentary baskets of grapes “to practically every State in the Union and to Canada.”

According to an article in the April 29, 1937, edition of the Springdale News, “The baskets provided for mailing were filled with choice Concords and bore the label of the grape associations. . . .” Even more grape baskets were sent in 1926. So I got to thinking, what if our grape basket is one of the festival baskets? The label from the Springdale Grape and Fruit Growers Union has a 1920s vibe about it. Most of the grapes grown in the Springdale area were sent by truck or rail to the Welch Grape Juice plant in bushel baskets or crates. The history of this basket will remain a mystery until a grape festival basket with its shipping label appears one day or we find an image showing the baskets prepared for mailing.

Wild Goose #3. According to the 1937 article, during the 1926 grape festival “Special containers of grapes were sent to President Coolidge and to Premier Mussolini. The containers were small refrigerators consisting of veneered pine boxes 24 inches square, inside of which were copper containers holding eight four-quart baskets of grapes with a net weight of five pounds each. Ice was packed around the copper container to preserve the grapes.”

Curious to know if there was a record of the president receiving this gift, I contacted the Calvin Coolidge Presidential Library and Museum in Massachusetts. The archivist there graciously checked the photos and scrapbooks in their collection, but nothing turned up. A check with a manuscript reference librarian at the Library of Congress, which has a Coolidge Papers collection, was also negative as Coolidge destroyed most of his personal papers before his death. I think the fate of the grape box and the president’s thoughts about it will remain mysteries. But there’s no mystery as to why a box was sent to Premier Mussolini of Italy. The Italian immigrant community of Tontitown supplied tons of grapes to the Welch plant over the years. 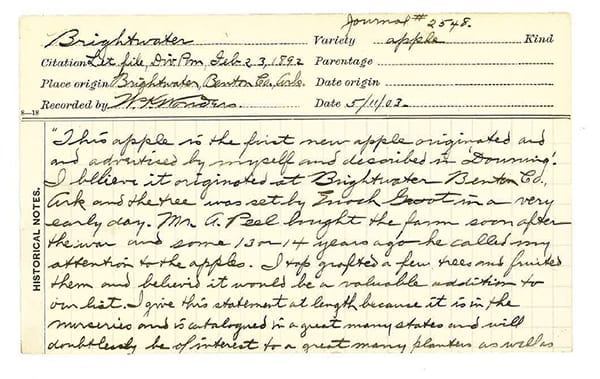 Wild Goose #4. When I attended a recent event at Brightwater, Northwest Arkansas Community College’s new culinary school in Bentonville, I heard one of the staff members say that the apple for which the school is named is extinct. Curious to learn more, I contacted Guy Ames of Ames Orchard & Nursery in Fayetteville. Guy’s a passionate plantsman who’s been growing fruits and fruit plants adapted to Ozark conditions since 1983, including several Arkansas heirloom apples. He put me in touch with Scott Gothard in Amorel (Mississippi County). Equally passionate, Scott’s hobby is collecting and growing every Arkansas apple he can find. Both men searched their reference books and contacted friends in the field in an effort to find Brightwater.

I also heard from Sara Lee, archivist at the National Agricultural Library (NAL) in Maryland. She generously spent quite a bit of time digging for Brightwater info in NAL’s early fruit books and records. Her efforts turned up several interesting tidbits, including the June 1884 edition of  Gardener’s Monthly and Horticulturalist which included a note from J.B.G. [probably nurseryman John B. Gill] of Springdale, who had mailed two apples to the periodical for review. The editor pronounced Brightwater as “excellent” and a “very desirable apple for that far down section of the country.” 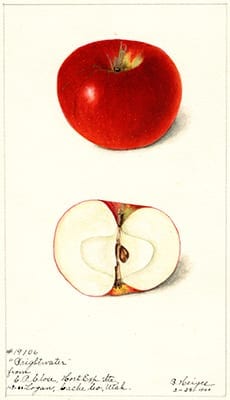 Sara also sent a scan of an index card with an excerpt from an 1892 letter by George F. Kennan of Rogers. Kennan is said to have established the first nursery in the area. He grew and promoted Brightwater. He writes, “I believe [the apple] originated at Brightwater Benton Co., Ark and the tree was set by Enoch Groot [Trott, the first settler of Brightwater] in a very early day. Mr. A. [Albert] Peel bought the farm soon after the [Civil] war and some 13 or 14 years ago he called my attention to the apple. I top grafted a few trees and fruited them and believed it would be a valuable addition to our list. I give this statement at length because it is in the nurseries and is cataloged in a great many states and will doubtlessly be of interest to a great many planters as well as nursery men.”

At this point finding Brightwater, if it’s still out there, will take a concentrated effort from apple hunters who know what they’re looking for, heirloom growers throughout the nation who may have Brightwater in their collection, and contact with folks in Brightwater and nearby Avoca who perhaps have old apple trees growing on their property. A daunting task but I take heart with what Scott wrote: “If we can find it, we can save it.”

So, four questions, zero answers. That’s the problem with a wild goose chase—sometimes you run into a dead-end or the search is greater than what you have time for. But the interesting bits of history that you learn and the generous, helpful people you meet along the way sure are fun. My grateful thanks to everyone who took the time to answer my questions.

There are a number of marvelous turn-of-the-20th-century images of Arkansas fruit in the USDA Pomological Watercolor Collection. The National Agricultural Library is in the process of digitizing their American catalogs in the Henry G. Gilbert Nursery and Seed Trade Catalog Collection.  As of February 2017 they had over 26,000 catalogs digitized!