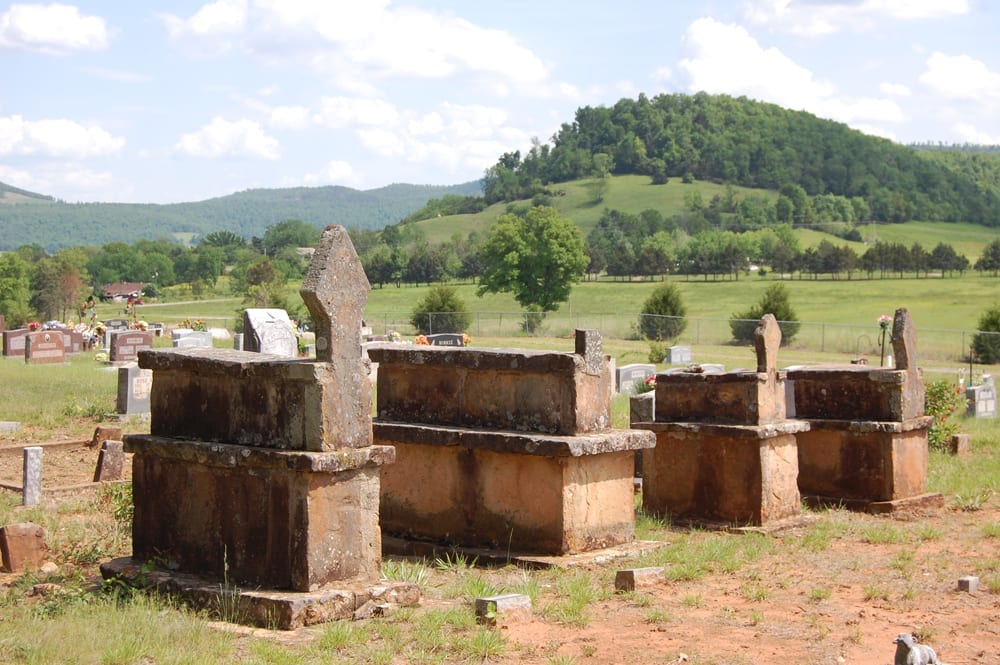 Canaan Cemetery with Ward Mountain in the distance.

Last week my job took me to Marshall High School over in Searcy County. There I spoke to students about the life of folk artist and Searcy County native Essie Ward. Afterwards, I paid a visit to Canaan Cemetery on the outskirts of town, where Essie and other Ward family members are buried.

The view from Canaan is a mixture of rolling green pastures and forests of oak and hickory. Just a few fields away, Ward Mountain, also known as Russell Point, rises up, a silent watchtower. It is so lovely here, a fine place to say farewell to a loved one’s Earthly bonds. But what moves me most on this day is not the idea of farewell, but the idea of remembering, and of being remembered.

Canaan Cemetery with Ward Mountain in the distance.

Within Canaan’s bounds are pioneer tombstones unlike any I’ve seen in the Arkansas Ozarks—two-tiered slabs of sandstone with an upright headstone hewn into a diamond and fitted into place. (I’m calling the diamond a headstone because it’s on the western end of the sandstone tiers. Most burials in old Ozark cemeteries are oriented in an east-west direction. The body is placed in the grave with the feet to the east, so as to be able to rise up and meet Jesus, who will come from the east on Resurrection Day.) Looking at these sandstone markers, I can’t help but reflect on the people buried here, the family they left behind, and the lives they all lived. I remember them, even though I never knew them.

Cast iron markers decorated with a dove, leaves of three, lamb, and farewell handshake. The marker on the far right still has the paper epitaph behind a glass inset.

Next, a row of cast iron markers catches my eye. I don’t see them often in Ozark cemeteries; in the language of bird watching, I’d call the sighting of a cast iron marker “occasional to rare.” They’re of a similar, mass-produced style, probably dating to the late 1800s. A panel in the midsection, covered with a glass plate, offered a protected place to insert a paper memorial or epitaph. The glass plate, ergo the paper epitaph, often fell victim to breakage and weathering. In fact, I had never seen a cast iron marker complete with glass plate and paper insert until my visit to Canaan. And what few cast iron markers I had seen always had a lamb embossed on the top. In Canaan, I see not only a lamb, but also a dove, a farewell handshake, and leaves of three. Looking at these cast iron markers, I can’t help but reflect on the people buried here, the family they left behind, and the lives they all lived. I remember them, even though I never knew them. 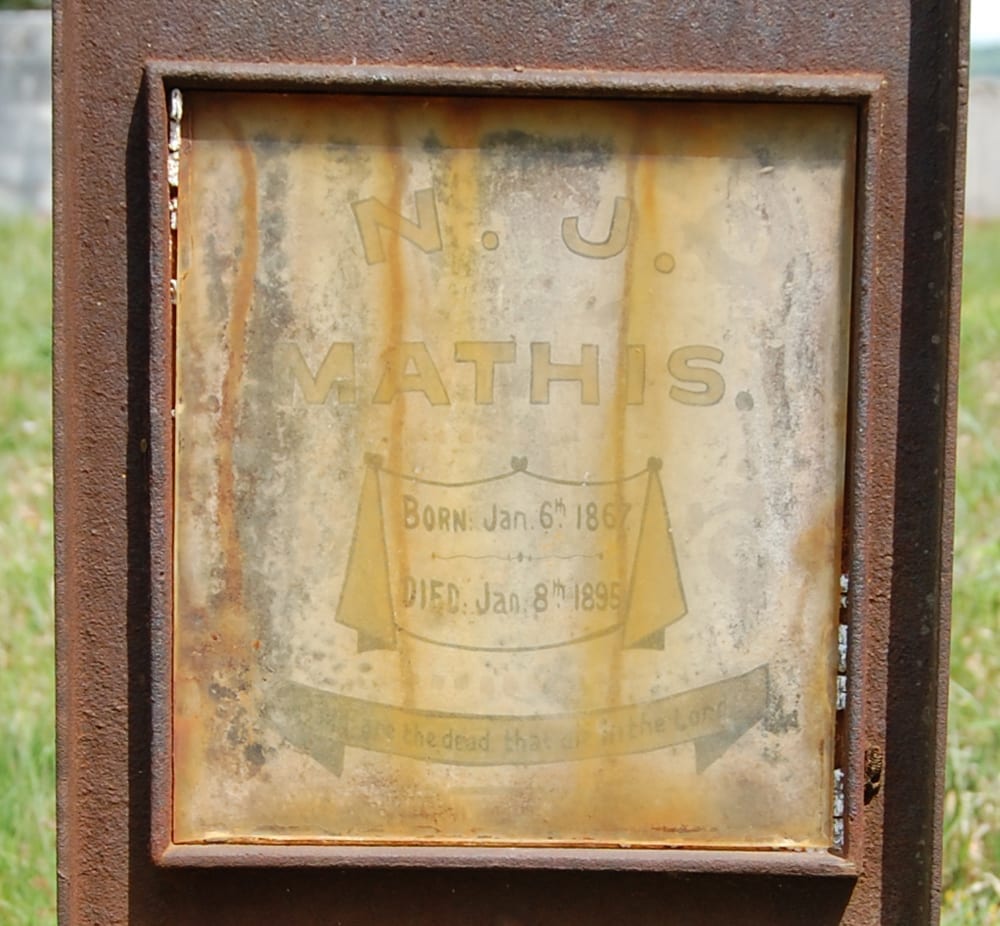 The old Upland South tradition of scraping the graves clean of grass and mounding them with dirt still exists in sections of Canaan. This amazes me. Who in our fast-paced world has time to scrape weeds and grass and topsoil down to the clay subsoil? To maintain the hardened clay surface, to sweep the leaves away, to haul in dirt now and then to keep the mounds fresh. To carry on this tradition of respect and devotion for family members who’ve been gone a century or more. To teach the younger ones why this is done, and why it should continue. Who has time? Somebody who understands the value of remembering, and of being remembered. 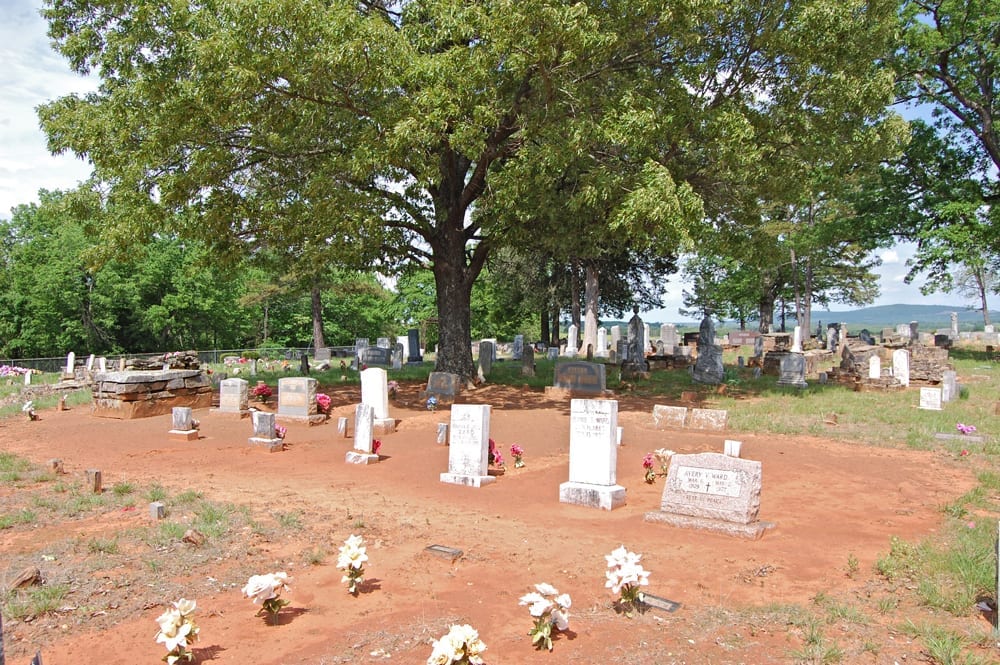 This day at Canaan, a woman tends her family plot. She rakes leaves and gathers up weather-worn plastic flowers. As she hauls the debris away to a dumpster, she calls out to me, “Do you have people buried here?” I say no, that I just like old cemeteries. We talk for a few minutes. She tells me of a life spent coming to this cemetery, of being a little girl and helping her mother and aunt make crepe paper flowers to place on the graves for Decoration Day. Of coming out here still, part of her routine for sixty-some-odd years. She comes to Canaan with the idea of remembering, and of being remembered.