We love it when folks stop by our museum to look around, and when big yellow buses creep up to disgorge loads ‘o kids. All day, people come and go—they’re the reason why we’re here. I imagine that very few visitors realize that beneath their feet lies a subterranean world where folks toil with the museum’s unseen internal workings. Those of us stationed in the basement are light-heartedly referred to as “dungeon dwellers.” It’s a bit like a sensory deprivation chamber down here, a near total lack of sound, outside stimuli, and natural light. Some days we only pop up above ground for lunch and breaks, otherwise oblivious to happenings above and of weather’s capricious whims. For a few hours it’s easy to forget there’s a world of light and life above us. 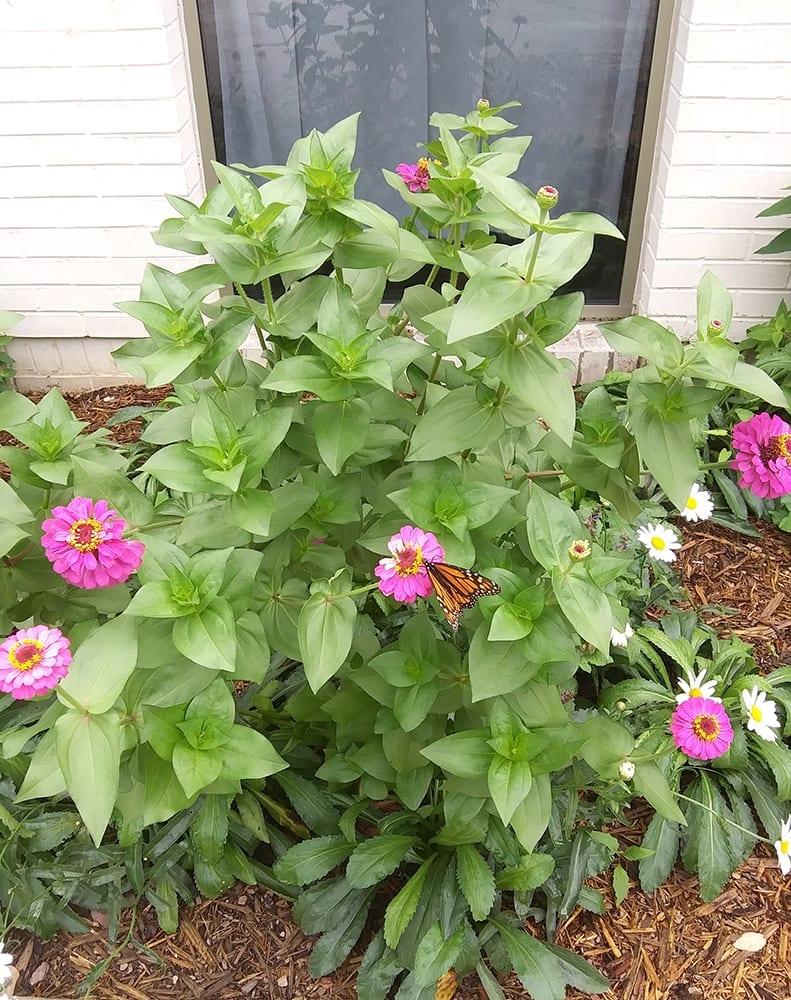 Zinnias (and a butterfly) outside the museum’s basement stairwell window.

Ascending the stairs from our basement, there’s a ground-level window looking west from a landing near the summit. Whipping back a curtain that keeps afternoon sun from baking the stairwell presents a worm’s eye view of the world outside. Rising from the basement, it’s our first dose of sunlight, served with a sliver of western sky, a glimpse of weather not quite here yet. Atmospheric reality thus revealed often surprises, does not agree with expectation. Weather doesn’t care, changed its mind while we were underground. Welcome to the Ozarks.

Humans need to be outside. Failing that, those of us under the building will settle for a little sunlight. That window is important. Summer’s abundance brings no hardship on dungeon folk. But when clocks fall back and cheating winter night steals our light, the window disappoints at day’s end, provides no solace. Those few short days of both arriving and departing in darkness take a toll. Like that first gasping breath after surfacing from a deep dive, that first sight of sunlight is anxiously anticipated, finally warms the heart when escaping basement darkness. Natural light is like air—you need it, but you don’t miss it until you don’t have it. 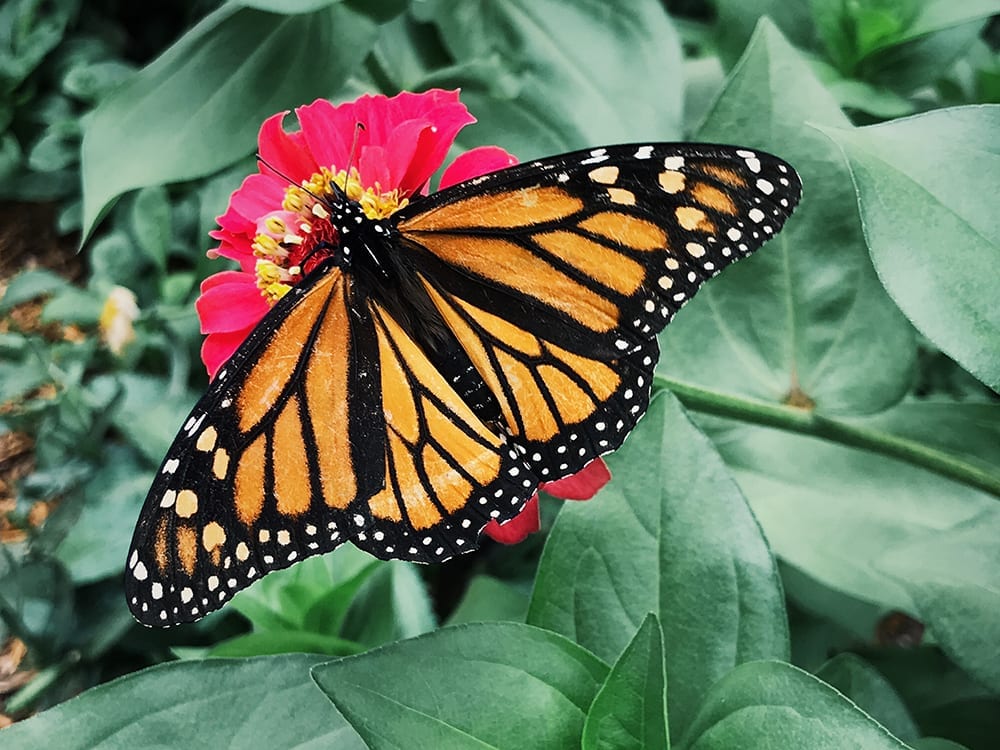 Closeup of a monarch near the stairwell window, taken by museum photographer Bo Williams.

Certain basement denizens have been down here for decades. As far as I can discern, our bodies haven’t yet begun to physically adapt to underground environs. No loss of pigmentation or eyesight, yet, though greying hair and cataracts laugh and hint otherwise. However, a behavioral adaptation marks the senior dungeon dwellers. They have to stop and look out that window on their way up the stairs. We wish we were outside, failing that, we’ll settle for a little sunlight. 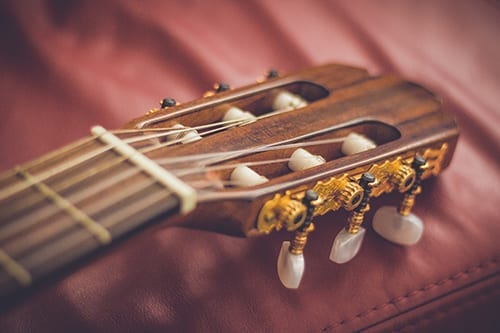 Photo by Marcin Nowak on Unsplash

Working in and around museums for well over twenty years has jaded me somewhat. Considering all the cool and different stuff we get to experience, it’s rare that something really surprises me. Then I turned the corner into the men’s room at the Shiloh Museum and heard . . . Spanish classical guitar music? I was convinced I was dreaming or hallucinating, because there was no other way to make sense of the sound that I thought was coming from the men’s room, and here’s why.

I love to search for and listen to solo acoustic guitar performances. There are many flavors, old and new, from Spanish classical and flamenco to New Age stuff with names like “percussive acoustic” or “heavy wood.” Not what you normally encounter in Northwest Arkansas, but it’s often the soundtrack in my head. YouTube is about the only place to search for these genres. Just one performer, one instrument, no overdubs, no multi-tracks, but it often sounds like a group of players. It’s a tour de force sort of thing—musicians showing off because they can, and I love to listen. I’ll occasionally attempt to play a feeble line or two, just enough to appreciate the challenge. My family suffers much, but I digress.

Since I’m in a restroom in Arkansas and not on a street corner in Seville, my logical conclusion was that these familiar sounds were all in my head. But rounding the corner in the men’s room, I find a nicely dressed young man perched on a chair, scrunched over his Spanish Classical styled guitar, with his right foot propped on a tiny stool. He’s playing “Recuerdos de la Alhambra” by Francisco Tárrega, and he’s killing it. The acoustics in the bathroom are shockingly good. Startled by my sudden appearance, the young virtuoso was quick to apologize for invading my, um, space. I was quick to encourage him to keep playing, and asked if he would take requests!

In what sounded to me like a high Castilian accent, the musician explained that he had found a quiet spot to practice for a concert later that evening, just up the road at the Arts Center of the Ozarks (ACO). It wasn’t until much later that I learned he was part of a group of world-class musicians, winners of an international competition held in Ragusa, Italy. The contest is sponsored by the IBLA Foundation in New York, and the grand prize winners participate in a world concert tour. They play such prestigious venues as the Lincoln Center and Carnegie Hall in New York, the Tokyo Opera City Hall, and the Tchaikovsky Bolshoi Hall in Moscow, with a sprinkling of other venues across the United States. It’s a big deal, and we’re lucky that the IBLA performers have played in an Arkansas venue for the last eighteen years, luckier still that they wound up playing the ACO in Springdale.

Turns out the young guitarrista with the intriguing accent did take requests—he played everything I could remember from my mental list of classical selections. His take on Issac Albéniz’s “Leyenda” (“Asturias”) was superb—both the traditional Segovia-styled version, AND a faster and technically precise rendition in the manner of modern Croatian artist Ana Vidovic. Wore me out just watching. I was deeply impressed and humbled.

Fate had other plans for my evening, so I was bummed about missing the concert. It’s OK though, I enjoyed a neat little micro-performance in the most unlikely of places. And the acoustics were wonderful. 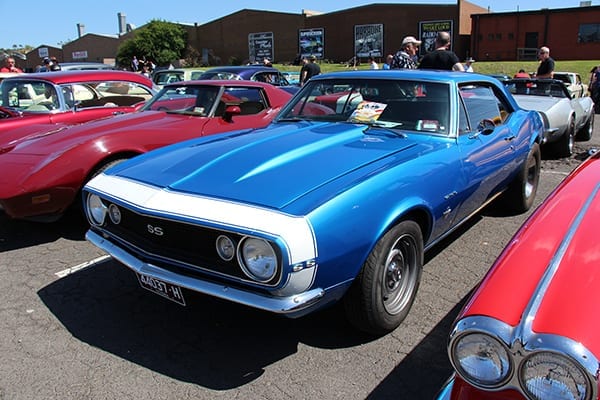 A 1967 Camaro similar to one driven by Chuck Mayes of Fayetteville, winner of the first drag races sponsored by the Northwest Arkansas Auto Association in 1975. The races were held on Ford Avenue in Springdale. Photo courtesy Sicnag/flickr.com

Last year we fielded a question about a “race track east of Springdale.” Nobody here knew about the track but sure enough, with a little digging and numerous phone calls, we rediscovered it—a fine little oval dirt track for stock car racing that thrived for a while and then disappeared. (See my article in the May 2014 Shiloh Museum newsletter.)

We love these interesting revelations about our history. They remind us of how much we don’t know, but they reward us with new insight. And it happened again when a researcher recently contacted Mayor Doug Sprouse’s office, and then, the Shiloh Museum, wanting to know about drag racing in Springdale. The person making the inquiry heard that back in the 1960s there was a drag strip in Springdale, and they were curious to see what we knew about it.

The answer was a big fat zip. Just like the last auto racing track question, nobody at the museum had heard of a drag strip, and no research files existed. There was some confusion at first, as some amongst us thought that this latest inquiry had to do with that roundy-round track mentioned previously. That was a circle track, where cars race for a number of laps on dirt. This question was about a drag strip, a different flavor of racing where cars line up side-by-side to see who can accelerate the quickest over a straight paved quarter-mile, hopefully with plenty of room to stop after the finish line. We found no evidence of a built-for-the-purpose drag strip in Springdale, but we did find that the Northwest Arkansas Automobile Association (NAAA) blocked off Ford Avenue at times during the 1970s (back then it was a dead-end lane just east of the Springdale Airport) and hosted some drag racing there. And it appears that they did it legally with permission from the Springdale police department.

Now that question of legality is important. Growing up in Springdale, I’d been involved in some drag racing here and there, but none of it was even remotely legal. The closest drag strips were in Tulsa or up in Kansas. That was inconvenient, so a lonely straight stretch of asphalt late at night would serve as a clandestine drag strip. You get two guys with hot cars together, and eventually somebody wants to know who’s faster. Maybe place a few friendly bets for kicks.

In the late 70s and early 80s I saw or heard about drag racing on Elm Springs Road, Friendship Road, Butterfield Coach Road, and occasionally on Hwy. 265 after it was widened to four lanes. Fayetteville kids wore out the road at the industrial park, using the railroad tracks to mark the end of their quarter-mile. There were never timers, no fancy starting lights. Some brave (or foolish) soul would stand between the cars with a handkerchief or a flashlight to signal when to go. Just line ’em up and go before somebody called the cops. Of course this was very dangerous and completely illegal, so kids, don’t even try this today!

My generation certainly didn’t invent this form of lunacy; we knew it had been going on for quite some time. The old timers used to organize their races (and bets) at Springdale’s Vic Mon drive-in and then proceed to Hwy. 264 to line up in front of Vanzant’s orchard and race back towards Hwy. 71. Sometimes drag races would just “happen” when two hot cars wound up next to each other at a stoplight. Like scenes from the movie American Graffiti, racing on public roads happened all over the country and law enforcement agencies were looking for ways to control it in the name of public safety.

And that brings us back to the NAAA blocking off Ford Avenue. Lawmen around the country were getting creative in their efforts to curb illegal street racing. As a result, various programs sprang up to provide hot-rodding kids a safe and supervised place to exercise their cars. While we don’t know the details, the NAAA may have been participating in one of these programs when they worked with local officials to block off Ford Avenue. During the summer of 1975 they held several drag races there, with cash prizes for the top contenders. While most of the racers hailed from Springdale, the events drew competitors from all over Northwest Arkansas. The folks with the NAAA charged competitors from two dollars to ten dollars to compete, but spectators were allowed to watch for free. In the newspaper ads for the races, the Springdale police warned folks to restrict their racing to Ford Avenue and only during the sanctioned races. Any other street racing would be punished with stiff fines and other penalties.

Like I said, we really don’t know all the details about how this came to be. We do know that the last legal drag race on Ford Avenue was held on August 31, 1975, and after that there is no more mention of such in the local newspapers.

If anybody has information about the NAAA back in the 1970s and their dealings with local law enforcement, we’d be grateful if you would contact the museum. Ask for me—we might know some of the same folks. I think that the statute of limitations has expired, so our past transgressions are most likely forgiven.

As for those who still feel the urge to race on public streets, I’d strongly advise against it! Maybe you can come to an arrangement like the NAAA and find a way to race legally. That would NOT be a drag. That would be drag racing.