by Susan Young | Artifact of the Month, Household Goods, Tools

Gaines Tucker and his wife, Estelle “Essie” Dill West Tucker, used this handmade fireplace poker at their home in the Dean community near Metalton (Carroll County). After Gaines Tucker lost his job during the Great Depression, the Tuckers moved to the Ozarks from North Carolina in the early 1930s. They bought an old cabin on ten acres in Carroll County, where Gaines farmed and Essie ran a second-hand clothing shop out of their home to help make ends meet. Gaines died in 1940 and Essie stayed on in the cabin until her death in 1951. 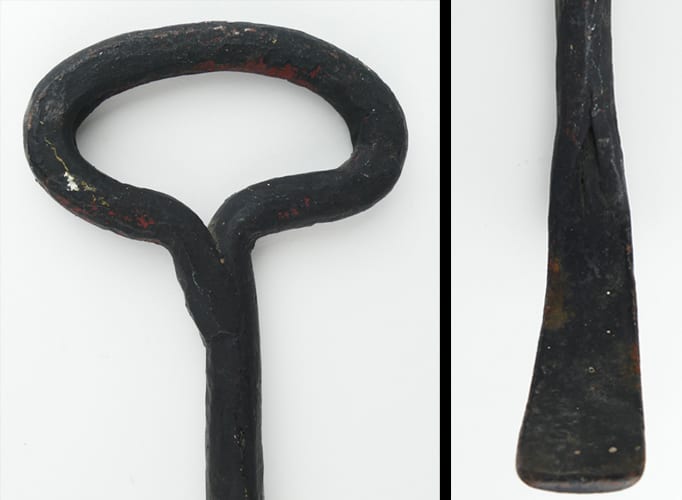 Closeup of handle and poker end.

by Susan Young | Artifact of the Month, Tools

A carpenter’s slick is a type of chisel used with two hands to pare long surfaces of wood following the grain. It was used in timber framing where heavy timber (logs and tree trunks) rather than dimensional lumber (like two-by-fours) was used in construction of buildings.

This Witherby-brand slick comes from the Lockwood Searcy estate. His grandparents came to Northwest Arkansas in the 1850s where they settled on a farm east of Springdale. The family moved into Springdale in the early 1870s. Lockwood (1879-1966) worked as a cooper as a young man, making barrels for the fruit industry that thrived in the area in the early 1900s. In the 1940s he inherited many items from his grandparents, including a box of tools. In later years Lockwood kept a workshop in the back of his garage. The Searcy garage and home are now part of the Shiloh Museum campus.

Thomas H. Witherby, of Milbury, Massachusetts started making fine steel chisels in 1827. The quality of production brought Witherby high regard among tool users. Witherby sold his company to the Winsted Edge Tool Company of Winsted, Connecticut in 1869. Three years later that company decided to drop its line of tools and concentrate on making Witherby chisels. They later added high-quality gouges and drawknives to their product line.